Hearing loss, part 3: Why does everyone mumble? Whatâs that again? What does an audiogram tells you about your hearing and what doesnât it tell you?

Many of us begin to experience difficulties hearing as we age. It may seem like other people are mumbling or that it is easy to hear in some situations but almost impossible in other situations.

In Parts 1 and 2, we discussed aging-related hearing loss, and how the ear and the brain work together to listen in everyday life. In Part 3, we discuss what the results of a basic hearing test, an audiogram, can or cannot tell you about your hearing difficulties and why.

What does the audiogram tell you about your hearing?

The results of the most common hearing test are shown on an audiogram and these results are used to define ‘normal’ hearing.

The audiogram will tell you your hearing thresholds. A hearing threshold is the quietest sound (measured in decibels hearing level (dB HL)) at which you can hear a sound. The sound of a pin drop would be near the hearing threshold of a person with good hearing. During a basic hearing test, thresholds are measured for tones at different frequencies (measured in Hertz or cycles per second) that cover a range of five octaves. You can think of the frequencies of the tones used in the test as different notes played on a piano keyboard. Different frequencies have different pitches; like piano notes, some have a lower pitch (more bass) and some have a higher pitch (more treble). The results of the basic hearing test are plotted for each ear on a graph called an audiogram.

How good or bad is your audiogram? Is it typical for your age?

How good or bad is your audiogram? Is it clinically normal?

However, the definition of normal hearing used by the World Health Organization is not adjusted for age (2). Hearing is considered to be clinically normal if thresholds are between 0 and 25 dB HL. The green section (top of Figure 1a) shows the normal hearing range. If your threshold is in the green box then it is normal. If you are like many other older people then you might have normal thresholds at lower frequencies but not at higher frequencies. The red line on Figure 1a shows that a typical 70-year old woman would have high-frequency hearing thresholds that are worse than the clinically normal range (below the green box). This is the case, even though her hearing thresholds are typical for her age and gender. This means that you might have typical hearing for your age and gender, but your thresholds might not be as good as a younger person and they might not be considered to be clinically normal.

Thresholds on an audiogram can be interpreted as follows:

Figure 1: Audiograms of women in top panel and men in bottom panel (adapted from the International Organization of Standardization (1)). 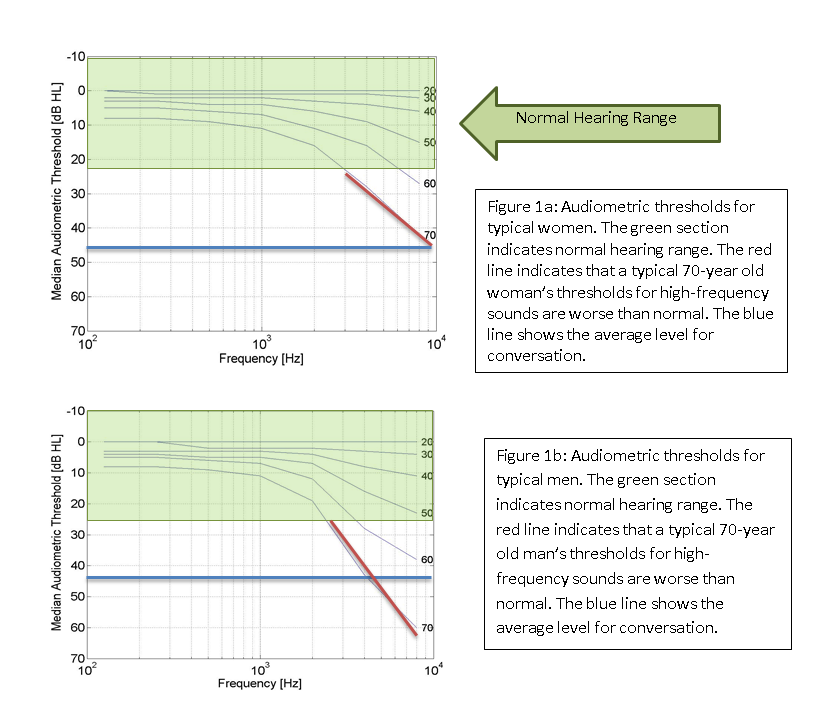 Although the audiogram is a good test for measuring the quietest sounds you can hear, the hearing problems of older adults are often not fully explained by the audiogram. Even when sounds are loud enough, and even if older adults have normal audiograms, it is still common for them to complain about hearing problems, especially when they are trying to listen in busy, noisy, or group situations. To understand why people have trouble hearing even when sounds are loud enough, we have to know more about what goes wrong in the auditory (hearing) system as people age.

Does the audiogram detect all types of hearing loss?

Researchers have realized for a long time that aging can result in different types of hearing loss (3). Carefully controlled research on animals has provided evidence for three types of hearing loss that could worsen with age (4). Two types result in poorer thresholds for high-frequency sounds and could explain the changes in the audiogram discussed earlier.

Type 1: In the first type, the outer hair cells in the inner ear are damaged. This damage occurs usually by being exposed to environmental factors such as very high noise levels. Younger adults who work in industrial noise can also get this type of hearing loss.

Type 2: The second type involves changes in the blood supply to the inner ear that alter its chemistry. These chemical changes in the ear have been compared to a battery going flat (5). This type only occurs in older adults.

Type 3: The third type involves damage to the nerves connecting the ear to the brain. Recent evidence suggests that lifelong exposure to noise can cause neural damage to the auditory nerves. This nerve damage disrupts the way in which information from the ear is delivered to the brain (1). Such damage can occur even if the noise is not loud enough to permanently change hearing thresholds.

As people age, they often develop a combination of the three types of age-related hearing loss, but Type 3, neural damage, might not be detected by the audiogram. Speak to your doctor if your audiogram appears normal for your age but you are still having problems hearing in daily life.

Of course, one of the problems with high-frequency hearing loss is that some sounds simply cannot be heard. Making sounds louder (for example, by using a hearing aid) will help to bring sounds back into the audible range. In general, it is better to hear sounds than not to hear them. However, some people, especially those with the first type of age-related hearing loss described above (Type 1: damage to the outer hair cells in the inner ear), may actually become less able to tolerate loud sounds. This means that the hearing aid circuits need to make sounds loud enough but also protect the hearing aid wearer from sounds that are too loud. In addition, for most people with hearing loss, making sounds loud enough to hear does not necessarily make sounds clearer. The clarity of sound can be reduced because the ear can no longer analyze sounds properly.

It is common to have difficulties picking out one sound when many sounds are heard at the same time. For people who have the third type of age-related hearing loss described above (Type 3: neural damage), problems with reduced clarity and the feeling that sounds are jumbled together can happen even if the person’s audiogram is normal. Making sounds louder will not solve all listening problems, especially those resulting from neural damage. These problems are less about loudness and more about the how well the signals are sent from the ears to the brain. The good news is that, even if making sounds louder is not enough, other solutions might help solve the problems that many older listeners have in daily life (see Part 4).

In this four-part blog post series we cover various aspects of hearing loss:

Get the latest content first. Sign up for free weekly email alerts.
Subscribe
5 health conditions that can benefit from exercise
E-cigarettes for smoking cessation: What do we know?
Social isolation and loneliness among older adults experiencing hearing loss 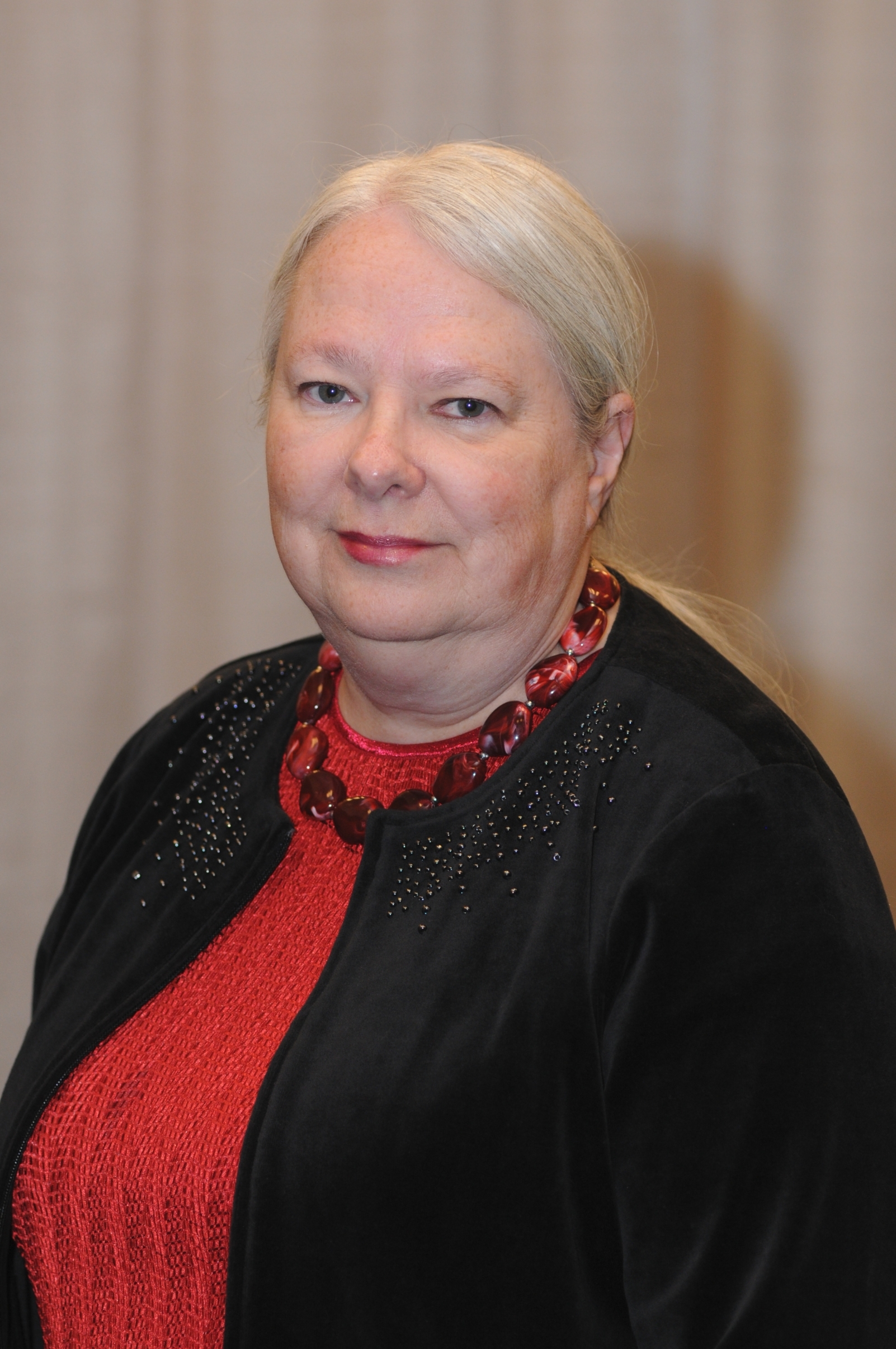 Kathy Pichora-Fuller is a Professor of Psychology at the University of Toronto, an Adjunct Scientist at the Toronto Rehabilitation Institute, and the Rotman Research Institute at Baycrest, and a Guest Professor at Linköping University in Sweden. She has worked as a clinical audiologist and she is now translating her lab-based research to address the needs of older adults who suffer from both hearing and cognitive impairments.