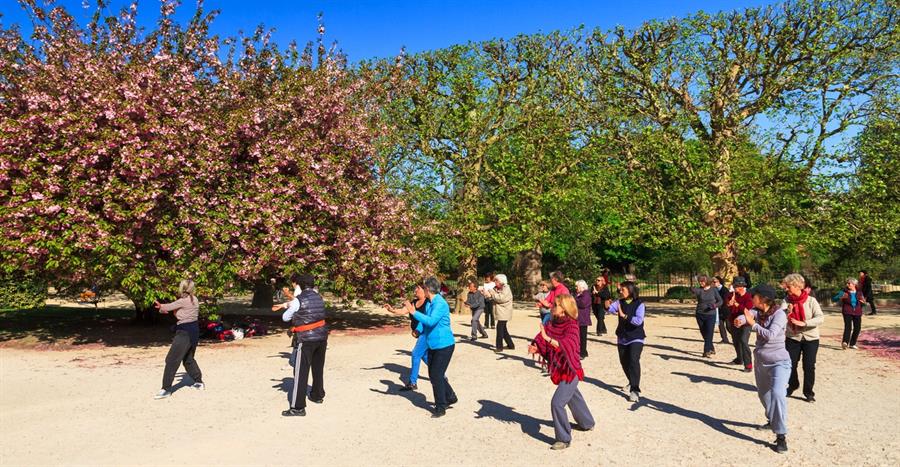 On a stroll through the park, have you ever seen a mass of people moving in what appears to be a slow-motion martial arts sequence? If so, you may have witnessed tai chi or ba duan jin, a sort of meditation in motion, and two ancient practices in Traditional Chinese Medicine (TCM) (1).

TCM has been practiced in China for over 2000 years (2). It is based on two main theories. The Yin-Yang theory describes everything as being made up of complementary opposites (like dark and light, or negative and positive). The Five Elements theory classifies phenomena in terms of five basic processes represented by the elements wood, fire, earth, metal, and water. It contends that there is a link between these elements in the environment and in the human body. A balance between Yin and Yang and the five elements of the universe allows the sustained flow of vital energy, otherwise known as Qi (pronounced Chi). This is needed to maintain or improve the functions of the human body (1;2).

Diabetes is a disease that is familiar to millions in Canada (3) and worldwide (4;5). For most people, management of blood sugar levels is the name of the game. But despite the arsenal of treatment options available — healthy eating, exercise, insulin, oral medications, and blood sugar monitoring (6) — many people struggle to keep their blood sugar under control (1;7-8).

A systematic review and meta analysis showed that TCM-based lifestyle approaches (alongside standard diabetes care) may improve the health of people with type 2 diabetes. Of the different TCM-based lifestyle approaches that were studied, tai chi and ba duan jin produced the most promising results. Although promising, these findings should be taken with caution, as more long-term and high quality studies are needed to better understand how TCM can help people with diabetes (1).

Within the review, different styles of tai chi were practiced at least once a week and up to twice daily, and with or without supervision. Overall, it was found that tai chi may reduce fasting blood sugar levels and body mass index, and improve the physical aspect of quality of life (e.g. pain and physical function) (1;9). The greatest benefit for most of these outcomes was seen when tai chi was practiced for at least 150 minutes each week, with additional benefits to average blood sugar levels (Hb1Ac) and the mental aspect of quality of life (e.g. mental health) also seen at this duration (1).

Similarly, ba duan jin sessions occurred at least three times per week and up to twice daily, and were either supervised or unsupervised. Overall, the review indicated that ba duan jin may lower fasting blood sugar and Hb1Ac levels, reduce body mass index, and improve symptoms of depression. The effect on Hb1Ac was most pronounced when ba duan jin was practiced for at least 150 minutes per week (1).

If you are struggling to control your diabetes, you may want to consider adding tai chi or ba duan jin to your standard diabetes care routine.

Get the latest content first. Sign up for free weekly email alerts.
Subscribe
Type 2 diabetes: Can it be reversed?
3 evidence-based strategies for foot health
Prediabetes? How to delay or prevent type 2 diabetes