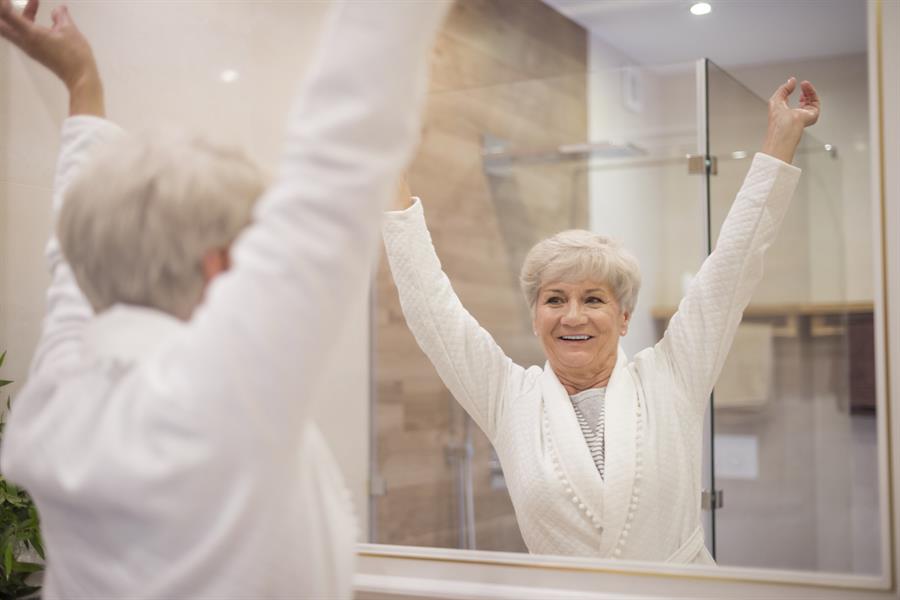 Mirror therapy for stroke rehabilitation: Tricking the brain into believing what it sees

Immediately after a stroke, about 80% of people have difficulty moving their arms or legs (1;2). Although these changes may not be permanent—with some people regaining partial or full limb function (1;3;4;5)—the road to recovery can be long. But did you know that it is possible to trick the brain into believing what it sees? Mirror therapy is being used more and more in stroke rehabilitation to dupe the brain and restore limb function (1).

Stroke affects up to 10% of older adults in Canada (6), making it the third leading cause of death nationally (7), and one of the leading causes of disability worldwide (1;8). Stroke occurs when the blood supply to the brain is interrupted or reduced, causing brain cells to die (9). This can cause a variety of temporary or permanent disabilities, including paralysis (1;3), pain (1;10) or difficulty completing daily activities such as walking, eating, or getting dressed (1).

Mirror therapy may be one way to help stroke survivors recover movement in their arms and legs (1). During mirror therapy, a mirror is used to create a reflection of an unaffected arm or leg in place of the affected limb (1;11). When the unaffected limb is moved, the mirror image “tricks” the brain into thinking that the affected limb is moving (1;12). Although it is unclear exactly how this process works (1), it’s been suggested that this illusion causes changes in the brain that help the person recover their mobility (1;13). Even better, mirror therapy is relatively easy to do, and has the potential to be completed at home by the individual themselves (1).

But does this approach really work, or is it all smoke and mirrors?

This review found that mirror therapy can be safe and effective. In fact, it improved upper and lower limb movement in affected limbs and the ability to conduct daily activities for up to and potentially beyond 6 months after stroke, with no side effects reported. While there was also some evidence that mirror therapy may reduce pain, definitive conclusions could not be made based on the studies included in the review. It’s also important to keep in mind that it’s not yet clear if mirror therapy can replace other types of stroke therapy—since more research is needed comparing mirror therapy used on its own to other strategies.

Overall, there is cause for optimism, as mirror therapy appears to be a good strategy that can be added to other stroke rehabilitation approaches (1).

Get the latest content first. Sign up for free weekly email alerts.
Subscribe
Horticultural therapy: Are there benefits to guided gardening?
Testosterone treatment in men: What you need to know
4 evidence-based strategies to help you on your journey towards stroke recovery